The End of a Tennis Season

April 27, 2014 by Madelyn Weaver in Athletics | Comments Off on The End of a Tennis Season

This past weekend were the conference tournaments for the men’s and women’s tennis teams. The men played on Friday at Genesis East and the women played on Saturday indoors at Genesis West. 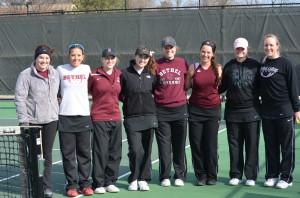 Unfortunately, neither team made it to nationals but that does not discount the great and successful seasons they had.

The Bethel men played McPherson in the semis of the conference tournament and lost in a heart-wrenching 4-5 dual. That is as close as they come! They all played so well and gave it all they had, and should look back on this dual with feelings of success because they improved this duals score when comparing it to their in-season score against McPherson 2-7. The Bethel men ended up third in their conference.

The women played Ottawa in the semis and dominate 5-0 (in the conference tournament you stop as soon as one team gets five matches). This was a great way to start off the tournament for the women and that took us to the finals with confidence. We then faced McPherson in the finals. Our in season score against them was also 2-7, but we knew there were five matches out there for us to win. Unfortunately, Saturday was not the day for that to happen. The McPherson team played close to flawless in doubles winning all three matches. This meant that we would have to win 5 out of our 6 singles matches. We had a player tied in a three setter, a match two points away from Bethel winning, and one match just beginning when McPherson got their fifth point. Again, I could not be more proud of the women’s team, we gave it our all and unfortunately it just wasn’t enough on Saturday to get us to the National tournament. The Bethel women ended up second in their conference.

We are also saying goodbye to some great seniors: Stephanie Shogren, Clinton Chlumsky, Wesley Goodrich and Kris Dubach. They have all been great players and great supports to our team throughout their four years and we will miss  them greatly.

Look for us this fall as we begin our next season, and my last!