September 1, 2013 by Melinda Regehr in Athletics, Campus Life | Comments Off on Football wins at home!!

This is my third year at Bethel and (correct me if I’m wrong) I have never left the Bethel football stadium with that winning high. Actually, I don’t think I have ever experienced a Bethel College football win! This is not to say they have not won during the past two years, just that I have not been at the games they have won. So, last night I went to the game with my normal feelings of “I really have high hopes for this year, but also don’t want to be disappointed again.” I arrived at the student section to find it was mostly full of non-students, so I found a seat and awkwardly kept standing, because I was going to stand for the beginning of this game! As students kept arriving we kept packing people into the small amount reserved for us. I don’t think I have ever seen that many students packed into about three rows of benches! But, we were there; Bethel fans were ready to support their football team!

I saw so many great passes and catches during the game and just great offense and defense in general. I will admit when the other team scored first I got a little nervous, but we came back! I also got a scare when the other team scored a touch down with 4 seconds left to the half… but in the end BETHEL PULLED OUT THE WIN!!! They won 41 to 24! As I said, I have never experienced 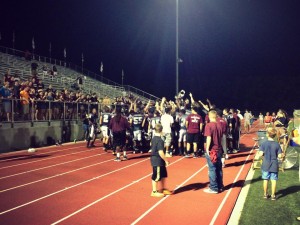 the feeling of a football win… it was worth the wait! Watching all the players celebrate that win was awesome! I even saw the coaches get into it!

Here is the Bethel football team celebrating the win. After they shook the hands of the other team and prayed together, they came over to the stands and included us in their celebrations! They did a cool, new chant together and then walked out to the field for celebrations with all their friends and family who came to support them!

This is a picture of just some of the amazing fans that the Bethel football team had last night! Thanks to Lina Adame for letting me use her picture. I would also like to thank the half time entertainment we had! Not sure whose children were up in the press box ( I have heard either the Chalashtari’s or Coach Marble’s) but I greatly enjoyed their random noises! Speaking of Coach Marble, I would also like to give a shout out to the volleyball team and their two wins this weekend! I was very impressed with the talent and team work of their team! Bethel athletics is off to a great start!