That would never happen here

March 8, 2016 by Kiley Varney in Uncategorized | Comments Off on That would never happen here

That’s what I thought to myself when I heard tragedies on the news.  My small town of 3,700 people in South Central Kansas would never have to face anything like that.  Our town had good people.  Our town did not have anything of interest for someone who would wish to cause harm.

Bethel’s text alert system sent out a notification just minutes after the shooting had occurred, informing us that there was an active shooter in Hesston but no danger was posed to Bethel’s campus.  I was at dinner in the Caf when I got the text.  The shooter was at Excel, a large company that manufactures lawnmowers.

It was a little after 5pm.  I contacted my mom, who works in Hesston just a couple blocks away from the Excel plant, to make sure she was okay and to ask if she knew anything about what was going on.  She assured me that she was fine, and filled me in on what had happened in Hesston just as she was leaving.  I was relieved to hear that she was safe. I was very saddened though to hear about the victims and those involved in and affected by the shooting.

What I do want to say though, is how encouraged and impressed I am at the support surrounding Hesston.  Companies here in Newton have posted signs with “#HesstonStrong” — a symbol of support to the community.  Numerous social media posts have shared similar support, and a billboard on I-135 Southbound is currently showing love and care for the community as well by displaying the “#HesstonStrong” design.

Many people on campus who knew that I’m from Hesston asked if I was okay, and if my family and friends were safe.  They asked if I knew anyone who was affected.  The support of the Bethel community was amazing.  This community is one that shares in joys and sorrows alike, and that is really important. 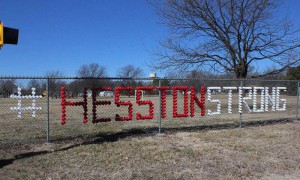 It’s so comforting to live in an area that cares so deeply and is so resilient even in the face of devastation.  Hesston’s people are strong and their faith and hope is remarkable.  The surrounding communities and people across the nation have shown what it really means to be a neighbor and that is part of what makes Hesston strong.

Hesston and it’s people have endured a great deal.  They have served each other with loving hearts and helping hands and will continue to do so — all the while staying #HesstonStrong.