September 20, 2015 by Eric Preheim in Athletics | Comments Off on Mega Saturday 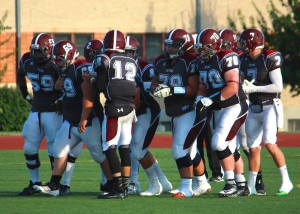 Yesterday was, as student event staff manager Brenan Erb calls it, “Mega Saturday.” It’s one of maybe two days each year when the sports schedules align and drop a bomb of competition and chaos on Bethel’s campus.

Yesterday, volleyball played McPherson College, soccer (both men’s and women’s) played York College and football played Bethany College — all at home. That is a lot of activity on the small campus of Bethel College. Wisely, it was also designated as Family Weekend. There were families traveling from all over to come visit their sons and daughters as the season begins to change to fall.

The college planned an outdoor meal on the plaza for lunch, and a tailgating meal for dinner before the football game. Turnout was outstanding and the weather was pristine but Family Weekend of 2015 will be memorable for more than just the sunshine and community.

This was Mega Saturday and a chance to reiterate the turnaround of Bethel’s sports programs. Mega Saturday provided four opportunities for Threshers to win in front of large home crowds. If there was any doubt whether Bethel athletics were moving in the right direction, yesterday put those doubts to rest. Volleyball won, women’s soccer won, men’s soccer won and football won.

What has been at times the exception is quickly becoming the norm in North Newton. Bethel sports are winning and the effect on campus is truly astounding. Support from families, fellow students, faculty and staff creates a community of support and joy in each other’s successes that is like no other.

It is important to mention that the Bethel cheer squad has grown in size and talent again this year. Their halftime performance was a glimpse into the future of what has and will become a cornerstone of Bethel athletics.

There was much to celebrate on Family Weekend and Mega Saturday. Thanks to everyone who did their part by supporting, working and competing for Bethel this past weekend. Days like yesterday are part of the reason why so many of us believe this college is an amazing place to go to school.