November 19, 2013 by Melinda Regehr in Events, Service | Comments Off on The Bethel Blood Drive 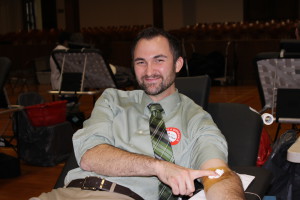 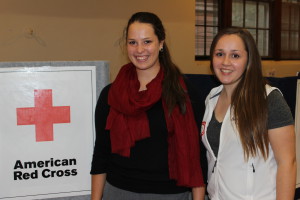 Madelyn Weaver and myself 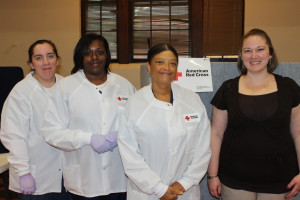 Just some of the Red Cross blood drive crew! 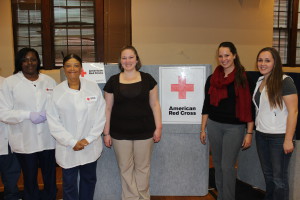 November has been a very busy month for me! As a co-leader of Bethel SCAN (Student Community Action Network) I was in charge of the blood drive this semester. While you might think this would not be very hard, there were actually many different tasks I had to finish before the blood drive could be a success.

First, I had to make sure we had pizza for people to eat after giving blood. Pizza Hut and Papa John’s were both extremely helpful and had no problem donating pizzas for the cause. We received four pizzas, plates, and napkins from both places. Any snack items besides the pizza were supplied by the Red Cross. I was also involved in multiple meetings and phone calls with our blood drive coordinator, Geneva Land.

Madelyn Weaver and I hung posters all over Bethel’s campus. Alyssa Scheuerman, Madelyn Weaver, Kathryn Kelman, and I handed out fliers after convo one day. But, by far the biggest duty I had was to get enough blood donors to sign up. So, Shianne DeFreese and I sat outside of the cafeteria almost everyday for two weeks. As I’m sure you all noticed! A few community members also called or emailed me and joined our cause to donate blood.

The day of the blood drive, some members of the Bethel football team, along with some other guys, came and helped unload the blood drive truck in the morning. There is a lot of equipment needed for a blood drive! Then, throughout the day I had volunteers coming in every hour. These volunteers included: Olivia Gehring, Javen Zellner, Alyssa Scheuerman, Katrina Regehr, Rachel Evans, Mallory Black, Jessica Ebenkamp, Aaron Topham, Lina Adame, Emily Wedel, Tana Myers, Koki Lane (who was also in charge of picture taking), Rachel Unruh, Raul Silva, Katelyn Melgren, Jared Regehr, Sarah Cunningham, and Madelyn Weaver. Michelle Unruh also picked up some supplies for the blood drive. After the blood drive was over, the Bethel tennis team came to help load all of the equipment back into the truck. Of course, I cannot forget all of the blood donors. Over all we had 68 people come to donate and of them, 57 were able to donate. This means we saved 171 lives in only four hours! Good job Bethel!

Lastly I would like to thank Ada Schmidt-Tieszen, Madelyn Weaver, and Shianne DeFreese for helping me plan the blood drive.