The Art of Conducting

October 15, 2013 by Michelle Unruh in Academics, Fine Arts | Comments Off on The Art of Conducting 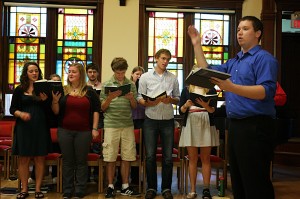 This semester, I’m enrolled in the conducting class at Bethel. We began the semester simply learning the different patterns and how to cue with our opposite hand. The first major unit that we had in this class was hymn leading. We practiced new hymns each class period. The rest of the class sang parts as one person conducted. There was also a video camera that recorded each class period. This allowed us the opportunity to watch ourselves and comment on our own work. This unit ended with one final opportunity to conduct hymns. Each member of our class was able to conduct a hymn at the hymn sing during chapel. Half of the class conducted a hymn that they had been preparing for a couple of weeks. The other half of the class waited for a request, and then decided whether they could conduct the hymn. This was a good experience for our class to conduct a hymn in front of a congregation larger than our class.

Next, we moved onto an instrumental conducting unit. We looked at a number of movements in Stravinsky’s The Rite of Spring. Again, we were able to practice conducting in front of our classmates. This time, a few students brought their instruments to class. Our very small orchestra was made up of a saxophone, bassoon, trumpet, two cellos, and piano. We also went to a rehearsal for the Wichita Symphony Orchestra. They were also performing The Rite of Spring. We got many tips from them and from watching their conductor, Bethel graduate, Dan Hege. We also were able to go to their performance this past weekend. Along with The Rite of Spring, they played Ravel’s Daphnis and Chloe: Suite No. 2, and Poulenc’s Concerto for Two Pianos, which featured twins Christina and Michelle Naughton.

Now, we are moving on to a choral conducting project. We each selected one song that we will rehearse with the class until it is ready for performance. We will get the chance to perform our pieces for an audience at the beginning of November. A conducting concert is schedule for Sunday, November 3 at 7:00 in the chapel in the Bethel College Administration Building. Come hear the hard work of BC’s Conducting Class!

The last portion of our class is focusing on Handel’s Messiah for the annual Messiah Sing that happens at the end of each fall semester in Bethel College Mennonite Church. As you can tell, we have had quite a busy semester so far, and it will continue to be busy as we head towards the end of the semester!